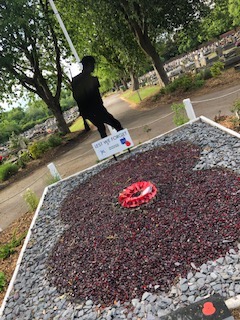 It will soon be the Eleventh Hour of the Eleventh Day Eleventh month, the time, that the guns fell silent at the end of the First World War.

Every November, we now remember the fallen. The symbol of this day is the Poppy, a bright red flower with a black core. The Poppy flowers between May and August, when its seeds scattered by the wind far and wide. These seeds can lie dormant for some time, and it is only when the ground is disturbed that the seeds will germinate. The Poppy, therefore, had the perfect growing conditions on the battlefields and it’s because of one man and two women, that the Poppy is the flower that represents Remembrance Day.

The first, a Canadian soldier, John McCrae, was on the battlefield at Flanders on the Belgium / France border. He noticed with some wonder how, amidst all the carnage that was surrounding him on the churned up fields, a red flower was growing in abundance in the obliterated ground.

He wrote the poem ‘We Shall Not Sleep’, more commonly known as ‘In Flanders Fields’, so moved was he, by this beauty amongst the Hell on Earth. Flanders Fields was the collective name for the battlegrounds in occupied Flanders.

John’s poem moved a young YMCA canteen lady, Moira Michael to write her poem, ‘We Shall Keep the Faith’. She vowed to always wear a poppy as a mark of remembrance for those killed and those returning mentally and physically changed forever. At her own expense, Moira tirelessly promoted the Poppy to honour the servicemen and managed to convince the American Legion to adopt the poppy as their official national emblem of remembrance.

Finally, a French woman, Madame Anna A Guerin, the founder of ‘The American and French Children’s League, returned to France after Armistice and organised French children, woman and war veterans to hand-make cloth poppies to sell to the public to raise funds for the servicemen. She spread the word to Frances wartime allies and Britain duly took up the cause.

remember to honour the fallen in your family history, pop along to Daisy Bumbles Florist at our shop in Toll End, Tipton to order a fitting tribute to a family hero.