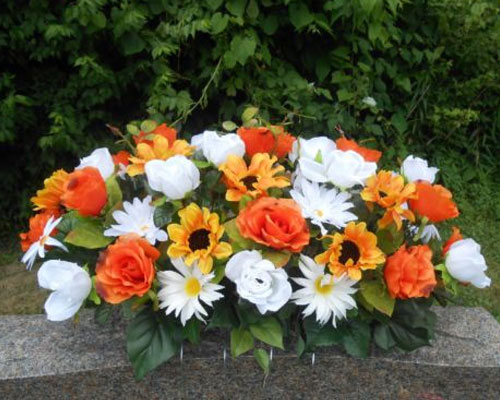 We are swiftly heading into autumn, Some of the trees are showing the first signs of transformation as once again, and nature begins to wind down towards winter.
At Daisy Bumbles Florist, this time of year sees a shift in the colour spectrum, away from the bright colours of summer into the more calming autumn colours of Yellow, Orange and Gold of Autumn Flowers. These are the traditional colours but are by no means exclusive. Adding some Lavender, Deep Red or Light Pink into the mix will undoubtedly spice up the autumnal palette.

Around the corner is Halloween which, with each passing year, seems to become bigger and bigger.
Despite what you may think about Halloween and America it turns out we British are actually to blame! Its origins begin in the distant past in Britain where it was then known as the Festival of Samhain in the old Celtic religion.
Its believed that the border between the spirit world and ours become very thin at this point in the year and the people of the town would dress up to scare the spirits away.
The Christian religion then turned the time into a celebration of All Saints Day. People would go door to door dressed as Saints on the eve of All Saints Day.

In the late 19th Century Scottish and Irish Immigrants brought the tradition to the United States where, by the turn of the 20th Century, the Halloween celebrations exploded with Pumpkin carving and trick or treating being added to the mix.

Only with the imported TV shows from the States in the ’70s did Halloween see a resurgence in the UK. Back then the kids would go around the local houses often with little more than a candle in a jam jar as embellishment. These days with a few differences, Halloween in the UK is just as hectic as in the States.

The Americans may take more time and pride in their costumes and only call on people displaying pumpkins on the porch, but Halloween is nowhere to stay.
As more and more people in the UK make a bigger deal out of the day, the house decorations get more and more extravagant. An excellent way to create a Halloweenie feel to your house is with Flowers from Daisy Bumbles Florist.
The day is about more than just Orange and Black. Pumpkins are more versatile than just as a lantern. Use a pumpkin to create a vase for a vivid display of flowers in all the gothic colours. Mix Blood Red with Deep Purple, Green with Blue or even add a touch of brown in with the Orange and Black.

Instead of cutting the top off of the pumpkin why not use a large screwdriver to pierce holes in the skin from the base, wrapping up and around it, then insert your flower stems into the holes creating a show-stopping centrepiece fit for anyone’s Halloween table.

Your creative flair only restricts you. Buy some eyes to place into the centre of your roses, have lots of little plastic spiders crawling all over a display of white roses, add some bats or a crow to your presentation, buy a polystyrene skull from a joke or craft shop and imbed the flowers into the top to make a skull vase. It’s a great way to have fun with the kids deciding what to make and how it’s going to look.
From our shop in Toll End, Tipton we wish you a happy and safe Halloween.